This is a quick follow-up to yesterday’s post highlighting the issue of online Brand Confusion for certain Kombucha companies.

Here’s a two examples we came across in our research.

I found two separate accounts for this Charlotte, NC brewery. The main one has information about their brewery. The second was a much small account that was profile of their bar where patrons can enjoy organic kombucha, traditional ales and lagers, sours, gluten-free wild ales, and gluten-reduced beers.

It seems advisable to merge or delete the lesser account. It only has 31 followers.

Here’s a more serious case of brand confusion, where there are two Facebook accounts, each with thousands of followers.

Ironically the larger account with 5,738 followers seems to be one that has been left behind in a rebranding of the product. It’s not been updated since January 2012. The account with 2,203 followers is current.

The product pictured in the current account shows their brand found in stores today. 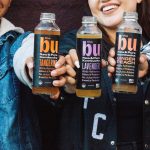 The product in the older, larger, account is presumably how the bottles looked six years back. 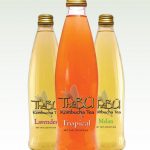 At some point the company switched their branding. Unfortunately they left behind over five thousand loyal followers on an older Facebook account. You don’t need an MBA to figure out this is a case study in how not to maintain an effective online presence!

Both Facebook pages link to the same company page. So it’s not a case of two companies accidentally using the same name. That is, however, the case with our third example.

The first,  with 254 likes, belongs to a UK kombucha company based in Oxford. They’ve posted updates this month. They’ve been on Twitter (128 followers) as @Kombucha_Kat since August 2017 and have just redesigned their brand when they switched from selling bottles to cans. They’re also on Instagram (5,556 followers) as @kombucha_kat. 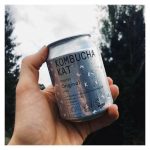 The second company with 69 likes is a home brew enthusiast in Los Angeles. They last posted in July 2017 and use the Facebook handle @theKombuchaKat. Unlike The Bu there’s no obvious  connection between this well-intentioned home brewer on the West Coast and the commercial company in Oxford.

Which might be OK, if it weren’t for  the online confusion.

Click on ‘Community‘ on the Los Angeles page and you’re presented with posts that reference the UK account. 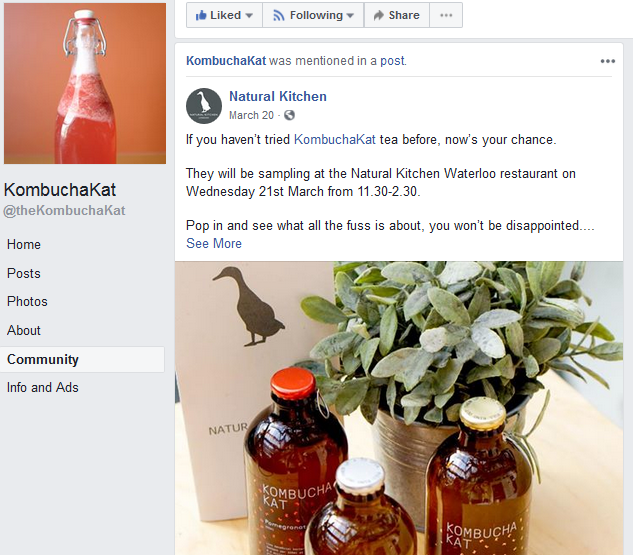 The UK company should look at the Facebook policy on trademark and copyright infringement to see if there’s anyway to ask FB to remove “the” KombuchaKat page.

Incidentally, on Twitter there’s also @KombuchaKats (12 followers) a “Kombucha enthusiast in Toronto” who last tweeted in 2011.

If you’re starting a kombucha company and want to minimize brand confusion I hope this post and the previous one will have been helpful. Large brands hire organizations like CompuMark, a part of Clarivate Analytics, to select trademarks they can protect. Their MarkMonitor division protects brands in the digital world. (Full disclosure: I spent four years working at MarkMonitor.)

For start-ups and smaller companies it’s advisable to at least check with a trademark attorney before selecting a name (especially one that might be a play on “Kombucha” or begin with “K”). A brand name consulting agency  like Eat My Words  works with companies to cook up unforgettable brand names and taglines.

Obviously the lack of a kombucha related name hasn’t prevented GT Dave from becoming the market leader in the USA (does anyone know what the initials stand for?). There’s zero brand confusion there.

Final note: I’ve always thought Kombucha tastes similar to the hard cider from the West of England known as Scrumpy. I’ll let you have the domain scrumpykombucha.com if you are interested 🙂