I was looking at the Facebook pages of various Kombucha companies to add to our blog posts on Twitter and Instagram when I came across the Lo Bros Facebook page. l was surprised to see it lists lovekombucha.co.uk as the URL in the About section. Humm, what gives? Perhaps there are crossed wires over at Facebook. Could they have mixed up the links from one company with another? Despite the fact they claim to be working to cut out misinformation and fake news, could I trust what I was seeing?

However, it seems this isn’t a problem with Facebook.

According to a recent report in The Independent “Los Bros (sic) is a new, Australian brand of “living sodas” and its UK branch has been taken over by the company formerly known as Love Kombucha, which brews in small batches in Berkshire.”

Thanks for visiting the Love Kombucha website. Love Kombucha is no longer in production. Read on to find out why…Love Kombucha’s Founder, Melanie, has teamed up with Soulfresh, an exciting and innovative food and drink company from Australia to bring Lo Bros, their best-selling kombucha and living drinks brand, to the UK.

That’s cool. Companies merge. In fact, many kombucha start-ups probably have an exit strategy that involves being acquired by a bigger outfit. It seems Melanie bought out Lo Bros in the UK as a way of expanding.

Academics note that brand confusion happens when companies act in ways that  dilute brands instead of building them. Without a clear differentiating idea, price is all that remains to motivate buyers. But your competitors can cut prices, too, so without strong branding, prices will fall, as will profits.

The fastest way to sabotage brand credibility is to present the product inconsistently. Companies that go back and forth between how a brand is presented risk hurting their business.

This seems to be a real problem resulting from the merger of the UK Love Kombucha operation and the Aussies. There’s a heck of a lot of confusion in the branding. This starts with the links we follow on Social Media.

The Love Kombucha Twitter profile has a broken link. 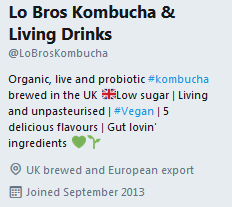 If you say company A “is now part of” company B that means (to me) that Love has been sold to Lo Bros. Which contradicts The Independent when it said “Los Bros … has been taken over by … Love Kombucha”. 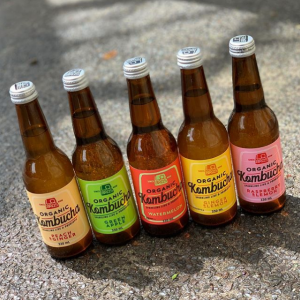 That image from Facebook ties into the Australian branch of Lo Bros.They sell in Oz, New Zealand and the UK. 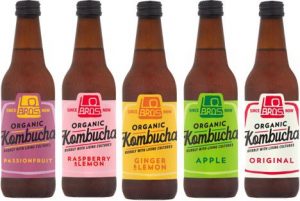 Next, here’s Love Kombucha listed at a UK distributor. How come? It’s supposed to be “no longer in production.” 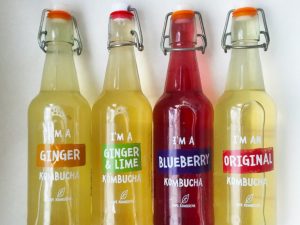 Say you choose to buy online in the UK. Buyers are directed to Happy Kombucha, a distributor located in a  Sussex business park. They mainly stock SCOBYs and other supplies for home brewers. Confusingly, they sell

Melanie has written that Love Kombucha is

…sold in over 1000 stores across 5 countries! All whilst retaining the authenticity of the product and using traditional brewing techniques…We decided to hook up with our Australian chums at Soulfresh.

A food movement that disrupts the status quo and takes a stand against the dumbed down, lifeless and soulless foods that are clogging up the grocery shelves and our tummies.

However, their Twitter profile describes them as a “distributor” not a brewer.

I’ve spent the morning trying to unravel this. It might not matter for a consumer in Sydney or Sidcup who just wants to pick up a bottle in a store. But online it’s a different story. I’m wondering:

If anyone from Love Kombucha, Lo Bros UK, Lo Bros Australia, Soulfresh, or Happy Kombucha can clarify what the real story is, please leave a comment below. Curious minds want to know.