We’ve already acknowledged Brew Dr. Kombucha as the most creative kombucha brewer for their Instagram pictures. Their blog does not disappoint.

Matt Thomas started Townshend’s Tea Company in 2006 with the idea of serving great teas in a casual tea house setting. In 2008 he began making kombucha in the kitchen, giving it the name Brew Dr. Kombucha.

This seven-minute video interview with Matt, included in a January 2017 blog post, tells the story of the company. It began with a business school idea of a tea house that Matt had back in 2003. In 2008 people began asking him about kombucha and he learned how their select teas made great-tasting kombucha.

The company grew with an investment from the Whole Foods Local Producer Loan. They expanded from 20,000  to 170,000 bottles-a-day capacity. They grew from an initial $45,000 investment employ over 100 people.

We loved their 2017 post offering a virtual brewery tour.  They include great pictures of their brewery and extensive descriptions of the process they use to create their product.

We started out in 5-gallon fermentation containers, then we went to 75 gallons, then 250, then 900 gallons. The fermentation tanks in the next photo hold 9,000 gallons each. The tanks have cloth-topped large vent ports on top and we keep the air moving constantly while holding a room temperature of about 75 degrees. Our batches take around 2 to 4 weeks to ferment.

Then they discuss the technology they use to remove excess alcohol from their initial ferment:

In order to make authentic raw Kombucha that abides by alcohol regulations, we utilize a technology that removes alcohol from liquids without the use of excessive heat. The machine pictured below is called a Spinning Cone Column. 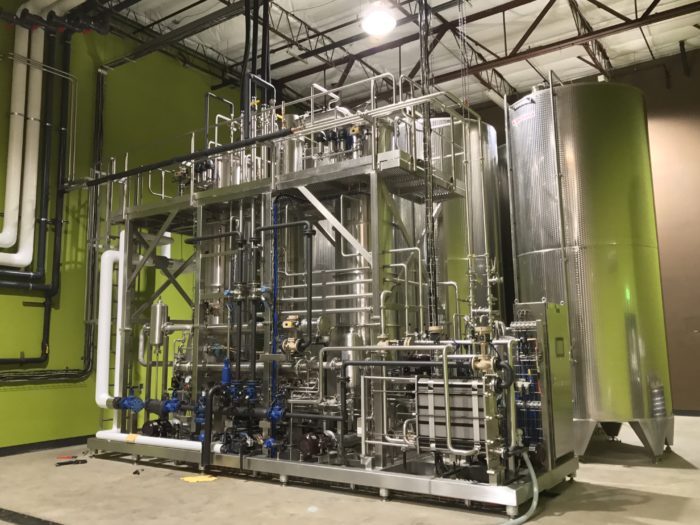 They protect the integrity of the product in the bottling process:

Because we have gone to the trouble of removing the alcohol, we need to keep our Kombucha cold enough that further fermentation doesn’t occur. Therefore we utilize a bottling process similar to craft beer. Our Kombucha is put into chilled “brite” tanks where it is gently carbonated overnight. It is bottled at 33 degrees and moved into cold storage immediately afterward. This way we ensure our distributors and retail partners get consistent, non-alcoholic Kombucha.

They are transparent about their size and projected growth plans:

As of May 2017 we are producing around 350,000 bottles every week and we expect to be making about twice that by the end of the year.

They blog about the various options kombucha-lovers have to pair the drink with various menus. From backyard barbecues to  kids snacks and spring salads the blog shows how to prepare and enjoy healthy meals with specific flavors of their beverage. They also share recipes that use kombucha, such as delicious Vegan Chocolate Shortbread Cookies and fruit smoothies.

A by-product of the process by which they remove alcohol is high proof distilled spirits:

The byproduct of this method of non-heat driven distillation is a lovely high-proof distillate that is made entirely of organic ingredients. This unique solution to solving the alcohol issue in raw Kombucha provided us with the opportunity to create the world’s first tea spirits. We named the distillery Townshend’s after our teahouses. The botanical spirits arm makes eight spirits all using a specific Kombucha as the base for each spirit.

These spirits are the basis for cocktail recipes listed in the blog.

Brew Dr. blogs about the benefits of kombucha. This starts with the basics of What is Kombucha? and addresses issues around the sugar, alcohol,  and  caffeine content  in their brew.

They also educate retailers and hospitality companies about the benefits of offering kombucha. And it’s not just aimed at their own brand. They suggest restaurants, cafes and pubs offer ‘booch from a variety of suppliers, which shows their true civic mindedness:

There are dozens of kombucha manufacturers and probably hundreds of flavor options from which to choose. Based on your previous taste testing and sales research, you should know which flavors your customers prefer.

This is a well-written, educational blog that complements their creative Instagram feed and active Facebook page. With the number of followers they have on these platforms, and the amount they brew, they might be a major reason Portland drinks 78 times more kombucha than the rest of the country.