Book Review: The Republic of Tea

Billed as a “vivid and intimate look into the minds of three entrepreneurs,” The Republic of Tea was published in 1992–before GT Dave even brewed his first batch of kombucha! It covers the gamut from ideation to writing a business plan, raising capital, product development, marketing, and structuring a partnership.

More than anything else, this is a tale of the nitty-gritty of business partnerships: between the wealthy Ziegler’s—founders of Banana Republic—and the younger Bill Rosenzweig, who fortuitously meets Mel on a cross-country flight and shares his vision for a tea company.

It’s very much a book from the early 1990s. It would be hard for those not old enough to remember how awful the tea served in lukewarm water in American restaurants and cafes was back then. Starting a business selling high-quality teas is an opportunity the nascent partners realize is ripe for the taking.

There’s a level of twee pretentiousness about the book, consisting of a series of faxes (this was, after all, the 1990s!) they exchanged as the idea percolates. Bill comes up with the brand name ‘The Republic of Tea’ – a nod to the Banana heritage of his mentor. He then terms himself the ‘Minister of Progress’ of the said republic. Mel is ‘The Minister of Leaves’ and Patricia ‘The Minister of Enchantment.’ Things get off to a rapid, almost fiery start, with over 60 faxes exchanged in the first month. They debate packaging designs, discuss product development ideas, and then…run out of steam.

The more experienced Mel expresses his frustration with his young mentee. Two months in, he is “more and more troubled by Bill’s unwillingness to grapple with the real issue of whether he wants to be an entrepreneur or not,” complaining that for all his excitement, there’s “nothing new in the Practical Department.” His blunt advice: “Life is not an idea. Starting a business is not an idea. It is getting things done.”

The turning point is when Bill, tired of the corporate world, takes a trip to England to meet tea blenders and develops the product expertise he lacked. The discussion ratchets up to a whole new level. Instead of endless iterations of the packaging design, the debate moves to selling loose teas vs. bags, wholesale vs. retail, pricing & product mix.

Their tea hit the shelves in May 1992. Later editions of the book include the previously confidential business plan and pro forma projections. The company was sold to new owners in 1994 and is today valued at $125 million.

This 20-month exchange of faxes chronicles the feelings and emotions of the three partners, showing budding entrepreneurs how to start a successful business that embodies his or her soul and economic realities.

This review originally appeared in the Fall 2022 edition of SYMBIOSIS – the Official Journal of Kombucha Brewers International. Both print-on-demand and electronic versions of the magazine are available for purchase. 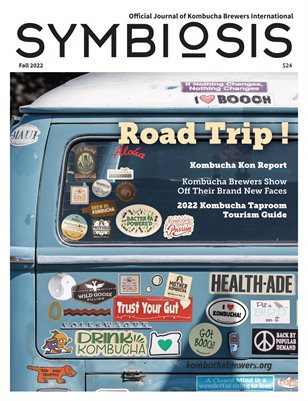