In my last post I reviewed the Top 20 booch companies on Twitter. I used a number of analysis tools, including Twitter Audit that detects fake or bot accounts (and can protect your brand against them), TweeteBinder that analyzes content and  Brand24 to report generally on social media activity.

Anyone who manages a social media account needs to know about tools like these. Plus popular ones such as Hootsuite that does everything from helping schedule pre-loaded posts, monitor brand mentions, reply to messages, and more.

But in order to really gain insights from our connected world it’s useful to look beyond individual accounts to the connections between them. I’m a big fan of NodeXL — the  Network Overview Discovery and Exploration for Excel –  a tool from the Social Media Research Foundation (SMRF) that lets you can collect, analyze and visualize complex social networks. It applies social science methods to social media.

If this sounds pretty geeky, it is! But the results are stunning.

The reports that NodeXL generate reveal who is the “mayor” of a hashtag like #kombucha and how the community divides into sub-groups. It collects data and parcels it up into network maps and reports.

I took NodeXL for a spin and looked at the networks of the two biggest players on Twitter.

NodeXL produced a report that shows who is talking about GTs Kombucha on Twitter. It generates a map of the different groups discussing the product. Think of a cocktail party with people talking to different “mayors” or “thought leaders” (or perhaps just “loudmouths”) on a specific topic. 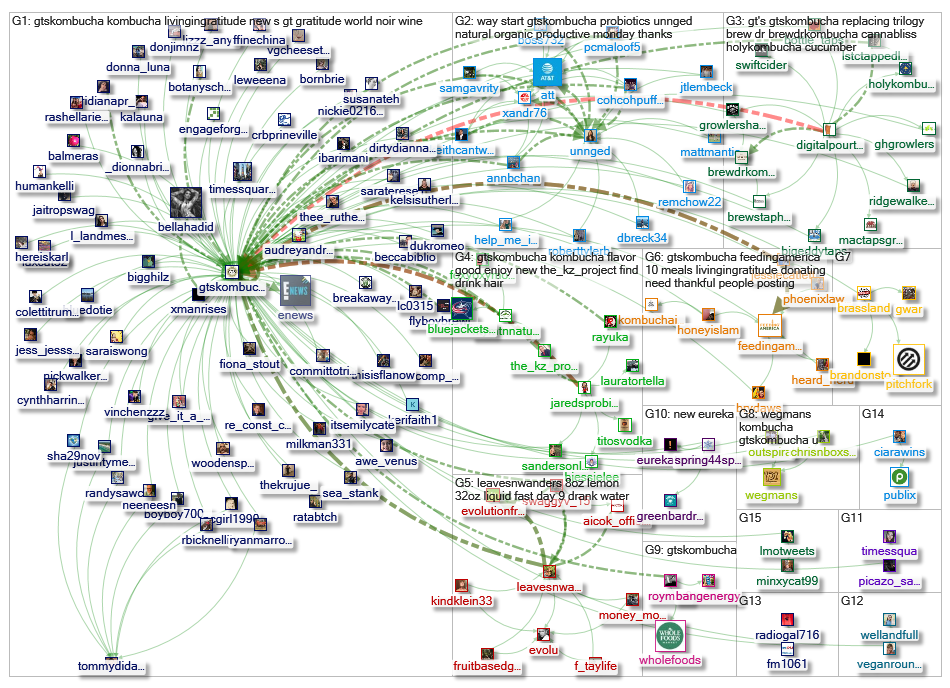 The graph shows a network of 145 Twitter users whose recent tweets contained “@GTsKombucha”, or who were replied to or mentioned in those tweets, taken from a data set limited to a maximum of 18,000 tweets. The network came from Twitter on Wednesday, 07 November 2018. The tweets in the network were tweeted over the 10-day, 8-hour period from Sunday, 28 October 2018  to Wednesday, 07 November 2018.

The largest group is, not surprisingly, clustered around GTs own account. The #LivingInGratitude campaign was the main topic. This was also the top hashtag in the entire graph. Smaller groups discussed topics such as #probiotics, #alcohol, #vegan and even #WhyIHateWegmans (a shop that has apparently stopped carrying GTs).

You’ll notice the smaller groups are a couple of people off in the corner discussing something only they find of interest. Larger groups gather around more popular topics.

The complete report contains a wealth of information including links to Instagram posts, blogs and LinkedIn articles mentioned in the tweets as well as hashtag counts (so you can see what resonates with this crowd),  and much more.

In contrast, take a look at the network that shows who is talking about KevitaDrinks on Twitter. 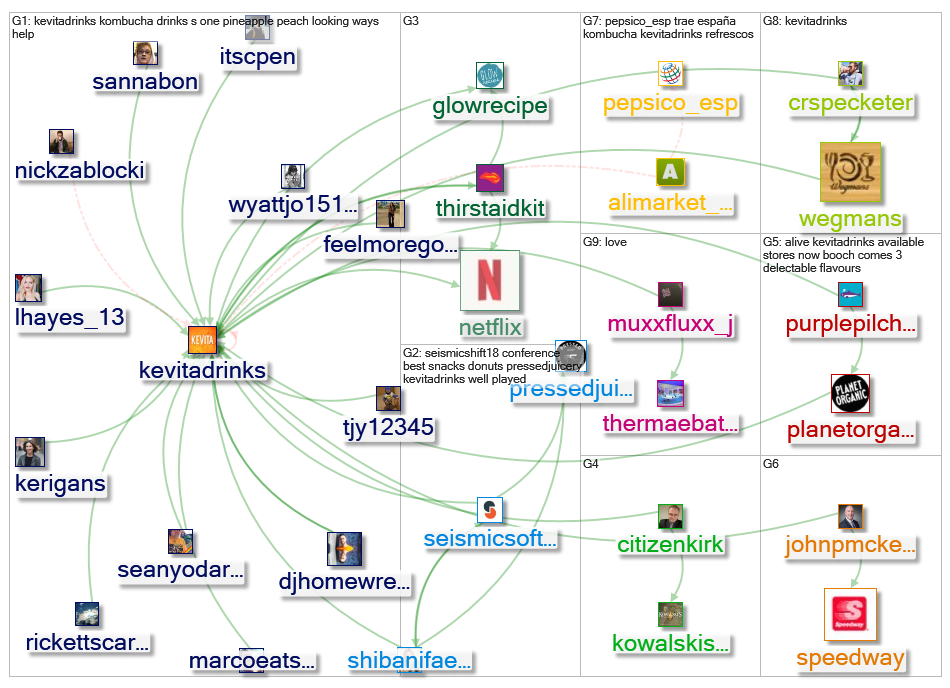 There are obviously far fewer active people — at least during this time period.

The graph represents a network of 31 Twitter users whose recent tweets contained “@KeVitaDrinks”, or who were replied to or mentioned in those tweets, taken from a data set limited to a maximum of 18,000 tweets. The network came from Twitter on Friday, 09 November 2018. The tweets in the network were tweeted over the 9-day, 17-hour, 58-minute period from Tuesday, 30 October 2018  to Friday, 09 November 2018.

The largest group focuses on KeVita. It includes a Spanish-language Food and Beverage trade publication discussing the Pepsi-owned brand. There are reviews of the different flavors. Interestingly, Wegmens markets is bashed again, this time for charging too much for KeVita!

Check out the complete report for full details.

A NodeXL report on the hashtag #kombucha produces a much different map than the brand-focused ones. 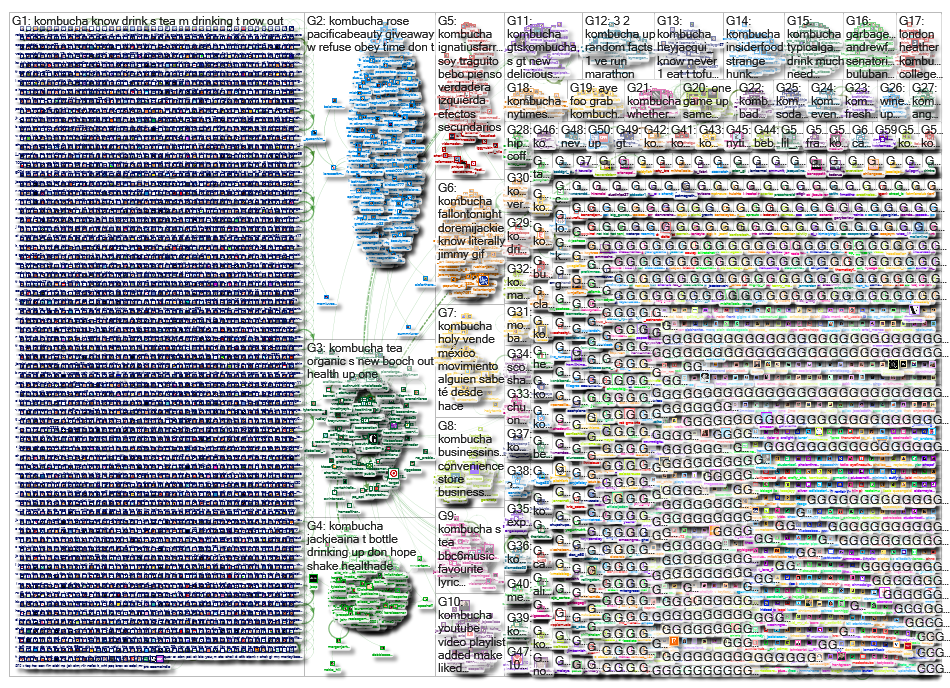 It’s clear that no single person is the “mayor” of this topic. There are just six types of possible network maps and this is an example of commentary from many disconnected participants: There are many dozens of “isolates” participating in a conversation cluster on the left side of the picture. Popular subjects like Kombucha typically attract large fragmented Twitter populations who tweet about it, but not to each other. The larger the population talking about a topic, the less likely it is that participants connect withone another. People have lots say about kombucha, but they don’t engage with others. It’s often a private passion, not a social one. They are relaying or passing along a message and there is no exchange of ideas.

And there’s lots of ideas in these tweets. Kombucha is a topic that commands massive interest.

Apart from the obvious topics such as #guthealth, #organic  and #vegan there was a flurry of comments about Jimmy Fallon using Kombucha as a literal punchline on his show. 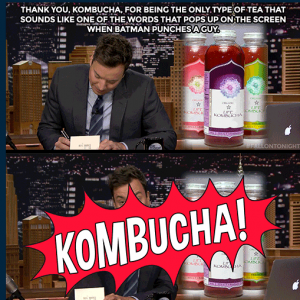 In terms of influential brands over that 10-day time in late October, Rocky Mtn Naturals  beat GTs and Heath-Ade. The little-known KombuchaGOLD also listed as a top influencer. How? Take a look at their account. They RT’d a dozens of popular posts about other brands.

There’s lots of mileage in an in-depth network report on a specific brand. A detailed map of public social media conversations uncovers influencers, tracks trends, and highlights relationships that a brand can use to expand their audience.  By becoming aware of the invisible web of connections out there on social media you’ll see  impact of your efforts on Twitter in a new light.