I’m just back from an extended trip to the UK.  I traveled the country from Bristol to Liverpool, Glasgow, Edinburgh, and London, curious to see where Kombucha was being sold. I tasted a variety of brands purchased in shops, cafes and pubs. And spoke with a number of brewers.

The bottom line? Kombucha in Britain is about where California was 10 years ago. There’s much more limited availability and fewer brands. But it won’t take anything like 10 years to catch up. The scene in the UK is changing rapidly. And in many ways the country is already ahead. I saw more vegan restaurants, non-GMO and gluten-free food on menus and an overall  awareness of health and wellness. The people in the street are certainly a lot slimmer!

The Times reports that fully a third of under-25s now drink no alcohol.

Almost 10,000 young people were questioned in a survey which confirmed that those aged 16-24 were the most sober in recent history, consuming considerably less than their parents.

This has to be a massive market opportunity for kombucha brewers in Britain. 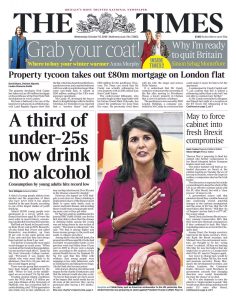 Britain has a vibrant pub scene — places that are much more welcoming than the typical neighborhood bar in the States.  The Guardian newspaper asked if Kombucha can compete with beer at the bar, where it’s increasingly offered as an alternative to alcoholic drinks.

There is the undeniable advantage that commercial kombuchas often contain less than one third of the sugar of regular soft drinks, and no artificial sweeteners. And if they help heavy drinkers cut down on alcohol consumption, there’s another win.

Wine editor and “knackered Mum” Helen McGinn writes about kombucha in the Daily Mail. There’s a risque subtitle to her review that asks “Are you brave enough to be kombucha-ed?” She acknowledges “the reality is it might be trendy, but its tart, often vinegary character can leave a bitter — some might say disgusting — taste.” However, it’s firmly on-trend:

… there’s no escaping kombucha now it’s broken out of niche health food shops and on to the shelves of Waitrose and M&S.

She employs her connoisseur skills by writing tasting notes on a half-dozen brands (perhaps an opportunity for someone who actually knows the drink — not a newbie — to publish? Hint hint.)

Kombucha Kat Original from Oxford gets the nod as the one “ideal to try if your new to the fermented drink.” It’s available in 330ml bottles for £3.49 ($4.55) from the online supermarket, Ocado.

Her top two selections are:

It smells great with lots of pear aromas and a whiff of tea. The vinegar twang comes after, but the ginger flavour kicks in, too, along with bubbles, and it feels like a really healthy mouthful. I love that it comes in a can, not a plastic bottle.

It smells a bit like weak apple cider (in a good way), with a hint of sweetness balancing the tartness. There’s a whiff of fermentation to it, but it’s very palatable thanks to fresh flavours and a gentle bubble.

Rugby star Jonny Wilkinson launched his No1 Kombucha brand in May this year. It’s exclusively available at Sainsbury’s. Indeed, it was the was the only brand I saw on their shelves.  Customers can buy a 275ml bottle of No. 1 in a variety of flavors for  £1.95 ($2.50). Richard McNeil, Front of Store Soft Drinks Buyer at Sainsbury’s says:

It’s clear there is growing appetite for ‘living’ food and drink with a big rise in the popularity of fermented products for example kefir, sauerkraut and kimchi products.. We’re making these easily accessible to our customers and are locating No1 Kombucha along with other chilled soft drinks rather than with more specialist lifestyle products.

Curiously, their online site only carries the Lo Bros brand (from Australia) and Oshee Energy Drink & Kombucha (from Poland), not Jonny’s No.1 Brand.

Grocery retailer Waitrose carries Equinox Kombucha. It’s priced at £1.80 ($2.30) for a 275ml bottle. They have good nationwide coverage, but not, unfortunately, anywhere near my hometown of Crewe, despite there being a Waitrose in nearby Sandbach. Perhaps Cheshire does not have the right demographic? Too many people still eating chip butties and drinking pints of Joule’s? 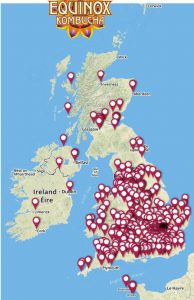 Sainsbury’s isn’t the only retailer that looks outside the UK for Kombucha. I was gobsmacked to see Marks and Spencer stock Wonder Drink Kombucha at their Edinburgh railway station branch. As previously noted, Oregon is awash in ‘booch, but what sense is there importing bottles 6,000 miles when good British brands are available? The Marks & Sparks buyers really should check out Left Field Kombucha down the road in Eyemouth.

This wasn’t the only example of retailers importing the drink from distant places.  Captain Kombucha sells for £2.99 for 400ml at the high street health food chain Holland & Barret​t. It comes from Portugal —  in plastic bottles no less.

And, zut alors! I was surprised to find Karma Kombucha  is shipped across the Channel from Brittany. Large bottles of were available from Better Foods at  Wapping Wharf in Bristol. Which is ironic, given their website boasts they “sell the very best organic, local and ethically-sourced food available, across its three sites in Bristol.”

C’mon British shop keepers! Never mind the environmental cost of importing bottles from around the world, what’s wrong with stocking brands that are made in your own country? I was left wondering, will Brexit will be a market opportunity for British brewers?

In Part 2 I’ll report on what I found in specialty shops, restaurants and pubs. Also share my impressions of a fascinating home brew cafe near St Nicholas Market in Bristol and, finally, let you know where you can find ‘booch in Terminal 2 at Heathrow.

Meanwhile, if you have any updates or corrections to this report drop me an email or leave a comment.