A Statistical Analysis of Kombucha Brands in the USA

The inaugural edition of SYMBIOSIS magazine came out earlier this month. SYMBIOSIS is the official Journal of Kombucha Brewers International — a trade publication for the industry. The first edition featured my report on Worldwide Kombucha Trends based on the statistics in the Booch News Worldwide Directory. This data came from social media listings on Instagram, Facebook, Twitter, along with company websites when available. We analyzed data on a total of 1,626 brands worldwide.

Beyond a count of the absolute numbers of kombucha brands in each region and each country, the report in SYMBIOSIS overlaid population data to show the number of brands per head of population. These ratios illustrate the ‘saturation level’ of each country much more clearly than the total number of brands.

These numbers include companies of all sizes, from the largest national (and international) brands such as GTs, Health-Ade, and Remedy to much smaller ‘Ma & Pa’ operations. Lacking information on company size (most are privately owned and do not report revenue or volume produced), the numbers nevertheless show how the market has evolved around the world.

The Worldwide Directory is an archival list. We include any commercial company with a professional label or logo, even though the social media platform has not had recent updates. The company might have gone out of business, or are perhaps everyone is too busy brewing ‘booch to post!

Due to space limits, the published article was not able to show numbers of brewers and the ratio per head of population in the United States.

As of February, 2020, we had located brands in 48 states and the District of Columbia (all except Delaware and Mississippi – which authors Kim and Mauborgne call “blue oceans” for any potential brewers looking for uncontested markets). There were 534 brands across the USA as a whole. The top 33 states in terms of the total number of commercial brands are:

It’s claimed that the top four brands in the USA (GTs, KeVita, Health-Ade, and Humm) account for 85% of total dollar sales in the conventional channel.

An overlay of population data shows that, despite having the most breweries in the US, California has fewer breweries per head than ten other states.

Hawaii has one brand for every 110,000 people, Nebraska one for every 980,000. Below the top 33 shown above, the remaining 18 States all have more than a million people per brewery.

Another way of looking at these numbers is to say that if California had the same number of brands as Hawaii there would be 361 rather than 103 brands.

The SYMBIOSIS article on Worldwide Numbers revealed that New Zealand had the fewest people per brand (at one for every 150,000 inhabitants). The 534 brands in the USA serve 620,000 people each. If the ratio was the same as in New Zealand there would be an astounding 2,193 brands from sea to shining sea.

Naturally, the market will determine how many independent brands emerge. Maybe GTs and Health-Ade, like Coke & Pepsi, will take all of the kombucha dollar between them. That’s unlikely. More likely is the flourishing seen in the craft beer market where there are currently over 8,000 independent brewers, Miller and Budweiser notwithstanding.

If you’d like to read the article on worldwide trends, or any of the other content, go buy the magazine! Digital dowload and Print copies of the magazine are available on-demand from the MagCloud platform. It’s printed in the US, UK, and mainland Europe and shipped with local postage rates. 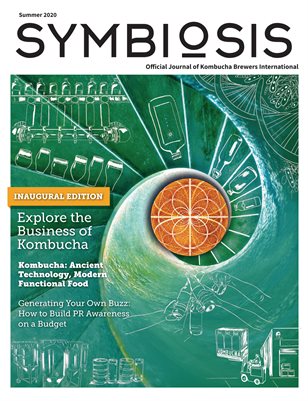